Read this article to learn more about how to use the TiltSense inclinometer on SeeSnake® cameras with TruSense™ technology.

TiltSense is an on-camera inclinometer that is included on SeeSnake cameras with TruSense technology. It calculates the angle of the camera head, providing an indication of the pitch of the pipe.

The TiltSense angle is displayed on SeeSnake CSx™ series Wi-Fi enabled monitors as well as the HQx Live mobile app.

TiltSense on a CSx series monitor screen during live video 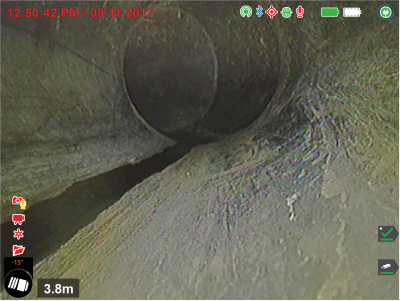 TiltSense information can be recorded to captured media on the HQx Live app and on CSx series monitors with version 1434 and later.

Note: If using a CSx series monitor, the angle value only will be recorded.

Watch the video below to see how TiltSense appears in video captured on a CSx series monitor. The TiltSense angle value is on the bottom-left of the display.

How to View the SeeSnake Camera Reel Odometer

How to view the odometer on SeeSnake camera reels with TruSense technology.

The TiltSense inclinometer calculates the angle of the camera head, providing an indicating of the pitch of the pipe. Read more about using TiltSense here.

Read this article to learn how to retrofit the TruSense cable counter to RIDGID® SeeSnake® Standard and Mini camera reels.

Learn how to enable TruSense™ technology on your SeeSnake pipe inspection equipment.